Buy All the Light We Cannot See: A Novel By Anthony Doerr from Amazon. 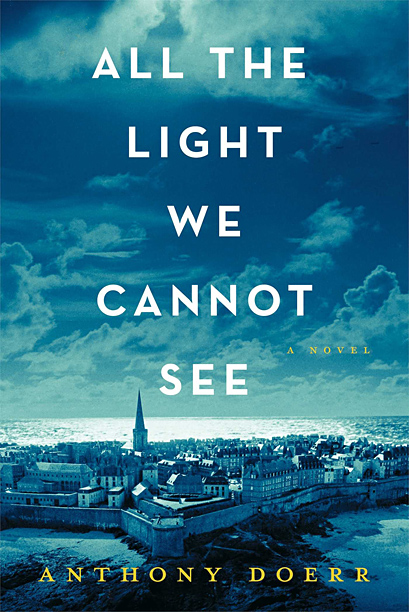 All the Light We Cannot See: A Novel Review

I want to talk to you this morning about a beautifully written book by Anthony Doerr – that came out in May of this year; The title of the book is All the Light We Can’t See. It is a book about World War II seen through the eyes of a French girl and a German boy. The story begins in 1939, goes through August 1944, and then progresses from ’39, backwards from ’44, intertwining the lives of the two children and how war affects them. The French Marie-Laure is blind from an early age and was raised by a devoted and loving father who is the keeper of keys and the locksmith of a museum in Paris. The boy, Werner Pfennig, is an orphan who, along with his younger sister Jutta, lives in a small orphanage in Zollverein, 300 miles northeast of Paris.

Marie’s father carves a wooden model of the Paris neighborhood where they live and has his daughter learn the streets and buildings by carefully feeling the intricate model he has created for her. When they are forced to leave Paris and flee to Brittany as the Germans advance towards France, they settle with a relative in Saint-Malo. There, the father re-carves an intricate model of the city, which includes each structure and street so that his daughter can navigate the streets on her own should she be left alone.

Werner is a brilliant young man fascinated by everything mechanical and especially by radios.

Doerr quotes Joseph Goebbels in an opening note: “It would not have been possible for us to take power or use it the way we have without the radio.” And it is the radio that finally connects the two children in complicated and interesting ways. From an early age, Werner and his sister listen to radio broadcasts from Paris that they love. Clever Werner finds a discarded and inoperable shortwave radio, repairs it, and begins picking up any signals he can from Germany and cities in Europe. Soon, he is repairing radios and other mechanical devices for everyone in his neighborhood. Eventually, readers learn that Marie’s eccentric uncle, Etienne, a recluse who is a lover of science and classical music, broadcasts science programs from a powerful transmitter he has built in his home, and Werner picks them up. Both Werner and Jutta are fascinated by science on the shows, Jules Verne’s Twenty Thousand Leagues Under the Sea readings and the enchanting sounds of Claude Debussy’s “Clair de Lune”. It seems simply magical to them that they can hear this voice from a city so far away that it brings them music and science.
One night Werner and Jutta tune into a squeaky broadcast in which a young man speaks in feathery French accented over the light. “The brain is locked in total darkness, of course, children,” says the voice. “It floats in a clear liquid inside the skull, never in the light. And yet the world that builds in the mind is full of light. It is full of color and movement. So how, children, does the brain, which lives without a spark of light, build for us a world full of light?
Reflections on light and color, both philosophical and scientific, season this book, and are deeply interesting and beautifully expressed.

When Marie and her father are forced to leave Paris due to their locksmith position at the museum, they are entrusted with an incredibly beautiful diamond called The Sea of ​​Flames. A German officer and gemologist who begins collecting antiques and looted treasures from Paris for the Reich, wants this gem that he has read about but has never seen. Their incessant search and the myths surrounding the gem provide another thread that unites the lives of the two children.

Werner’s radio skills led to his being recruited into an elite military school for German children, which is part of the Wehrmacht, and he was eventually assigned the task of tracking radio transmissions in occupied France. Werner’s mathematical method of triangulation to trace the origin of radio transmissions is carefully described in the book, along with other scientific developments of the day, all of which add to the story.

Marie-Laure miraculously survives the bombing of Saint Malo, although most of the inhabitants do not. Doerr quotes Philip Beck in an opening note:
In August 1944, the historic walled city of Saint-Malo, the brightest jewel on the Emerald Coast of Brittany, France, was almost totally destroyed by fire … Of the 865 buildings within the walls, only 182 were left in foot and all suffered damage to some degree.
In addition to the main stories of Marie and Werner, there are also side stories about other children, Marie’s great-uncle, Etienne, and her grandfather. But instead of telling you more about the moving story about the life and intersection of these children, a story that should be read rather than overlooked, let me just say simple.