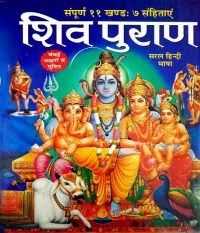 This Purana has a detailed description of the elemental interpretation, mystery, glory and worship of Shiva’s welfare form.

In this, he has been accepted as the principal eternal God in the Panchadeva. In addition to Shiva-Mahima, Leela-Katha, it has a beautiful combination of method of worship, many informative narratives and instructive stories. It has glorified the grand personality of Lord Shiva. Shiva – who is self-centered, eternal, is the supreme entity, is the world consciousness and is the basis of cosmic existence. Among all the Puranas, Shiva Purana has the status of being the most important. It has a detailed description of various forms, incarnations, jyotirlingas, devotees and devotion of Lord Shiva.

‘Shiva Purana’ is related to Shaivism. This Purana has prominently promoted Shiva-bhakti and Shiva-glory. In almost all the Puranas, Shiva is described as an idol of sacrifice, penance, Vatsalya and compassion. It has been said that Shiva is easily pleased and will give desired results. But in the ‘Shiva Purana’, highlighting the life character of Shiva, it is specifically mentioned about their way of life, marriage and the origin of their sons.

There are 24,000 verses in this Purana and its 4 sections are respectively

View or Read This Full Book