Download The Mayor of Casterbridge By Thomas Hardy pdf. 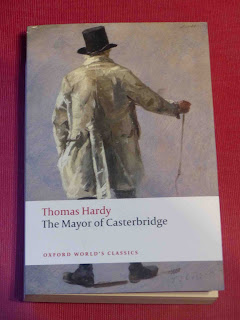 The Mayor of Casterbridge Description

The young Michael Henchard, a poor hay dealer, arrives at a rural fair with his wife Susan and their little daughter Elisabeth-Jane. In a drunken stupor, he sells his wife and daughter to a sailor, Mr. Newson, who takes them to Canada. About twenty years later, after Newson’s drowning, Susan and her daughter arrive in the city of Casterbridge. There, they find Henchard, who has climbed the social ladder and has become mayor of the city. Henchard, still feeling guilty for what he did so many years ago, promises to make amends and remarries Susan. But his past will chase him again and again. As he refuses to learn from the mistakes of the past, the fall of Henchard is inevitable.

“The mayor of Casterbridge” may not be as powerful as Hardy’s “Tess of the d’Urbervilles”, but it’s still a classic that deserves to be read. It has a strong plot (although too dependent on coincidences, it is not unusual for the author) and I really like the symbolism used by Hardy. The characters, the titular character in particular, are complex and interesting. Hardy’s prose is beautiful and not too difficult, but you will have to endure a little pessimism. It turns out that I really like sadness in my literature, so Hardy is definitely among my favorite authors of the 19th century. “The mayor of Casterbridge” did not disappoint.