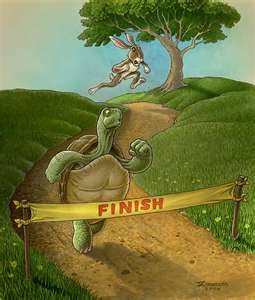 The legends of rabbits and turtles often say something like this. A rabbit made fun of the turtle for walking so slowly. The tortoise, tired of how slow the rabbit was on its feet, finally competed in a race. “I’m going to compete with you, rabbit,” she said; “And I bet I’ll win the competition.” The rabbit accepted the challenge and found a fox that determined the trajectory of the race and judged who ultimately won. When the race started, the rabbit jumped to the front, advancing at a good pace. He was so far ahead of the turtle that he decided that he could afford to stop and rest. The turtle was so late that even a little break wouldn’t hurt! However, the rabbit falls asleep quickly and the tortoise continues to move at its slow pace while sleeping. Finally, he reached the finish line and won the race. When the rabbit woke up, he was upset with himself for falling asleep. So he ran to the finish line as fast as he could on his feet, but it was too late, as the Turtle had already won.