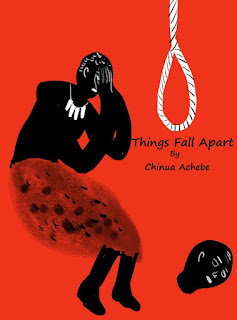 Things fall apart by Chinua Achebe. This is Okwonko, a respected warrior or fighter of the Umuofia clan. He is Unoka, father Okonkwo. He was a failure. Okonkwo had three wives; The first one has no name and is the mother of Nwoyes. The second is called Ekwefi, and the last was Ojiuo. As an offer of peace, a virgin and a boy named Ikemefuna were handed over to the village of Okonkwo. Okwonko committed some crimes against the earth goddess, such as beating his wife and killing Ikemefuna. Because of that, he was sent to his homeland, Mbanta. He had to start all his life again, he had to build a new house, farm and reputation.

During his 7 years, Obierika visited Okwonko, brought some news about the destruction of Abame and the invasion of Umuofia by the white man. Okwonko Nwoye’s son converted to Christianity. Okonkwo did not like that. The 7 years of exile ended and Okwonko returned to his village, Umuofia. In Umofia, Okwonko wants to kill all Christians, he doesn’t like the idea of ​​sharing his clan with them. Okwonko kills a white messenger. After killing the white man, Okonkwo commits suicide.